Getting athletes back to sports without surgery 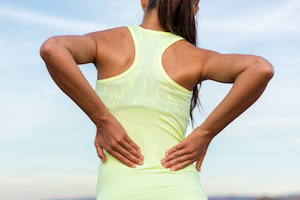 Many athletes with back condition decide to have surgery

Low back pain is a common problem for many competitive athletes, and if it's severe, it can threaten an athlete's career. There are many possible causes of low back pain, but a herniated disc is often responsible in this population, as athletes are more likely to experience this injury than the general population. A herniated disc relates to the intervertebral discs that rest between the bones (vertebrae) of the spine. It occurs when a jelly-like substance in the center of the disc pushes out through a crack in the tougher exterior, and it can cause pain, weakness and tingling or numbness. When this type of injury occurs in athletes, they are sometimes able to choose between having it treated with surgery or non-surgically (conservative treatment). Although surgery was once commonly recommended for both athletes and non-athletes with herniated discs, it's no longer clear which of the two treatments is better. In particular, it's important to measure the return to sports rate for athletes in order to determine which treatment helps them get back to their sport faster. Since evidence on this topic is limited, a powerful study called a systematic review was conducted. The systematic review identified all the relevant medical literature on surgery versus conservative treatment for herniated discs. This review was followed by a meta-analysis, which analyzes each of the studies found in the systematic review in detail in order to identify trends.

To conduct the systematic review, six major medical databases were searched for studies that compared patients with a herniated disc who had surgery to those who were treated conservatively. In particular, each study had to include information on the return to sports rate for athletes after these treatments. Out of the 260 studies that were screened, 14 fit the necessary criteria and were accepted. These 14 studies contained information on 964 athletes from the NBA, NFL, MLB, NHL and many amateur sports leagues with herniated discs that were treated either surgically or conservatively. The findings of these studies were then analyzed to see which of the two approaches helped athletes return to their sport faster.

No major differences found between surgery and conservative treatment

Overall, researchers found no significant differences between the two groups regarding return to sports. Some athletes returned to their sport faster after having surgery, while others returned faster with conservative treatment, and the rates between the two were very similar. This similarity was also found for long-term outcomes: the number of athletes that returned to their prior level of function in sports was close between groups, while baseball players treated with surgery had significantly shorter careers than those treated conservatively. In some cases, athletes who did not receive any treatment actually had similar outcomes to those who had surgery. These findings suggest that for athletes with a herniated disc, having surgery may not always be the best option. Not only is surgery more expensive and more likely to lead to complications, but according to this study, it may lead to similar-or worse-results than conservative treatment. For this reason, unless there are other major problems, an athlete with a herniated disc should consider being treated conservatively with physical therapy first. If a course of conservative treatment fails, then an athlete should consider having surgery, and they should be informed of the risks involved and the return to sports rates before doing so.